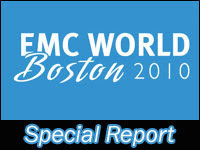 May 14, 2010 -- Just when you think you're out, I'm going to pull you back in. Here's a roundup of all of our EMC World coverage, including articles and lab reviews on VPLEX, Unisphere, Data Domain and a couple of Ionix and Atmos announcements that flew under the radar.

There's a clearinghouse of links with all of our articles and lab reviews related to the 10th annual EMC World conference below, but let's tackle the news we haven't covered. While sequestered in the hotel adjacent to the show, a couple of things went right by me.

First up, EMC built out its partner ecosystem for the EMC Atmos cloud storage platform with a new crop of service providers and ISVs.

EMC is also making a new edition of Atmos available in its efforts to entice more partners in the form of the EMC Atmos Virtual Edition.

It also provides an audit trail of SAN changes and rule violations, flagging potential service-affecting events as they occur.

Now for the recap.

EMC kicked off the show with the launch of VPLEX, a new appliance with a scale-out architecture that can "teleport" applications from one data center to another.

And here's a VPLEX/VMotion lab review from Enterprise Strategy Group…

After VPLEX, EMC made some moves in the unified fabric market with a pair of newly expanded partnerships with Brocade and Cisco:

Also of note was the introduction of Emulex's first hardware-based encryption HBAs, as well as its first design win for the adapters with EMC.

In the midrange, the rumors were right on. EMC unified the management of its Clariion and Celerra storage platforms and upgraded its FAST technology.

Finally, EMC added some SharePoint capabilities to its SourceOne family:

Our sister site, Enterprise Storage Forum, also covered the news of the week. Check out their articles from the show:

Kevin Komiega has been the Senior Editor of InfoStor since 2005. He was previously a senior news writer with SearchStorage.com and held a position as a public relations account executive with Porter Novelli, Boston. Kevin also spent four years running tape backup operations at the University of Rhode Island's Academic Computer Center. He can be contacted at kkomiega@quinstreet.com.