TikTok has introduced new features to help users measure and manage the time they spend in the app. This includes break reminders to prevent the endless scrolling in the feed and a new panel for tracking screen time.

It is also putting mandatory reminders in the app for young consumers after a specified time.

The recently released Tiktop app function allows users to manage the quantity of time they spend on TikTok during a single sitting. It enables them to plan frequent screen breaks.

This functionality aims to address app dependency problems. They arise from losing sight of the period you spend on TikTok each time you open another application. In other words, this is a tool for keeping track of the time one spends in front of the screen in various forms throughout every session. 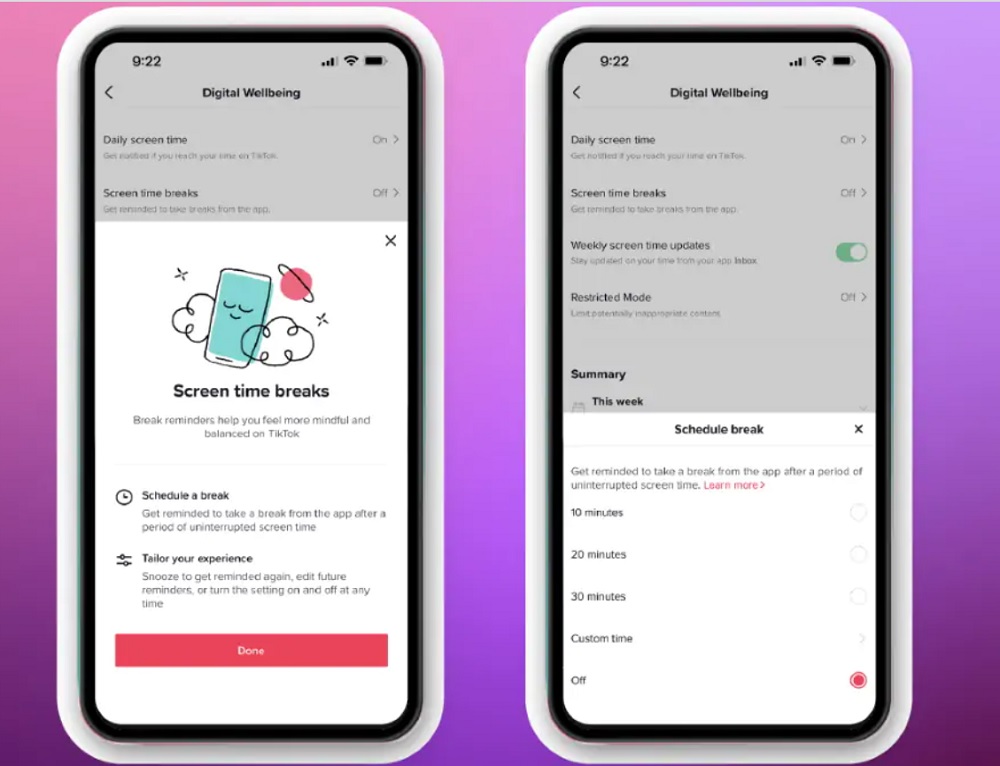 Users may instruct the app to remind them to take a break after a predetermined time.

By default, the new function sets break reminders for 10 minutes, 20 minutes, or 30 minutes. But users may set reminders for whatever length of time they like if they want to work for longer or shorter periods before being reminded.

TikTok mentions that the reminders function may be snoozed or removed at any moment, allowing users to use the reminders as they see appropriate. Users may choose not to restrict screen time on pleasant weekends at home. They may as well want to restrict their time using TikTok during work while attempting to sleep early.

The new Screen Time dashboard will provide more details about how much time a user spends on the app. It includes highlights of the individual’s daily app usage, the number of times the application was opened, and a split between daytime and nightly use.

Also read: Instagram Users Can Now Pin Up To Three Posts On Their Profile

TikTok has introduced new screen time alerts for underage users aged 13 to 17, while new screen time features are being rolled out internationally for people of all ages. If a child spends more than 100 minutes per day on the app, TikTok will notify them of the new screen time restriction tool the next time they log in.

The Growing Need To Implement Such Features In Tiktop App

While in the case of adults, many users have complained about the addictive nature of the TikTok app. These feature updates seem to be TikTok’s response to the same.

As far as minors are concerned, Generation X and millennial’s parents grew today’s up with technology or have used it for the majority of their professional life. A surprising proportion of adults still do not manage their children’s screen time and usage of digital gadgets.

According to a 2021 Kaspersky study, just half of the parents in the United States utilized parental control applications. It also included that only 44 percent monitored their children’s gadget usage.

The new Screen Time features seem to be deployed in response to a recent Wall Street Journal study about TikTok’s effect on children’s brains. The study references well-known scientific studies examining how the app’s algorithm affects reward areas in the brain, especially those linked to addiction.

Over a billion people use TikTok, making it one of the most popular short video-sharing platforms. It has…
byAkanksha