As we engage more and more in entirely virtual worlds, digital avatars will become a vital reflection of our true selves in the near future. This is why various platforms are attempting to develop the greatest 3D avatar tools to connect people with their apps better.

First Snapchat, then Apple, then Meta, and now TikTok has jumped on the trend by adding the ability for its users to create custom 3D avatars. As of June 8, 2022, the feature is rolling out globally and will be accessible through the app’s camera. TikTok’s avatars function in a way that is quite similar to that of Apple’s Memoji. Here, users may utilize their favorite Memoji figure as a digital puppet, with the character moving in reaction to the user’s movements while staring at the camera.

TikTok claims that it intends to make this particular feature as easily accessible as possible. It will continue improving and experimenting, guaranteeing that the experience genuinely represents everybody on TikTok.

In Miniature mode, users may overlay their personalized avatar over a TikTok clip. It can inspire users to become more ingenious. It can be done by embedding their digital characters in TikTok clips and remixes or offering voiced suggestions in films.

How To Use TikTok’s Custom Avatars 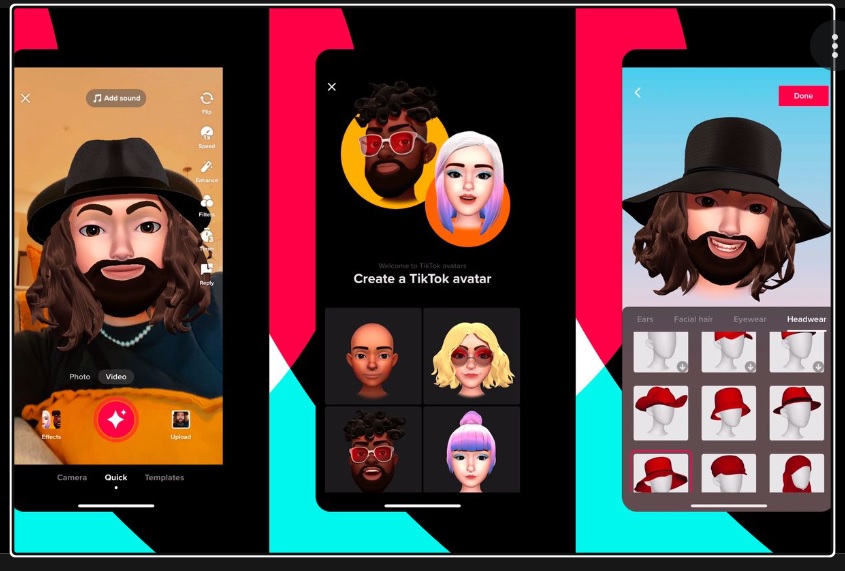 To utilize the function, launch the app, go to selfie mode, press an effect, and pick an avatar effect. The user may then build a personalized avatar by selecting a preset view or pressing the new button.

Users may also change the form of their avatar’s face, skin tone, hairdo, and accessories, including cosmetics. Users may film videos with the avatar, following their emotions and facial expressions and taking avatar images.

The Internet as we know it is progressing to the next level. Meta is excited to administer the next stage and ensure its continued significance in future versions of the web as we all know it.

Meta recently announced an improved technique for creating 3D avatars on Facebook and Messenger, as well as the possibility to use unique avatars in Instagram Stories and DMs.

Since 2019, Meta has enabled 3D avatars as an option in its primary app, with the ability to build a digital representation of oneself. It can also be applied to stickers, posts, replies, and more.

Earlier, Snapchat rolled out an update that permits all users to imitate their 3D Bitmoji avatars in actual Snaps. The users of Snapchat may now display full-body 3D representations of their Bitmoji avatars on their profiles.

Bitmoji has already been incorporated into Snapchat through the Snap map, avatar, and stickers. Hence this new feature will allow users to shoot and transmit photographs and videos exclusively using their Bitmoji personalities.

June seems to be a hectic month for players in the social media realm. We saw Pinterest unveil…
byMike Diver

Instagram has introduced parenting supervision tools in the Uk and Ireland this month. Instagram’s all-new pack of parental…
bySachin Sidharth