Have you ever had to stay away from Whatsapp at any given time to avoid someone online in a kind way? Well, it seems you may soon not have to anymore as Whatsapp is developing a feature that will prevent the messenger from showing your online status. It will be the ultimate boost to the Last Seen feature that you can enable or disable to or not show when last you were online.

In case you wonder where we learned that WABetaInfo was our source. Don’t worry; this blog is known for correctly predicting WhatsApp’s upcoming features.

An In-depth Overview Of The Upcoming Whatsapp Privacy Feature Some experts call it an Incognito feature, whereas others a privacy feature simply because it allows you to use Whatsapp discreetly. But what’s great about it is that it will let you hide your online status according to your preferences as follows;

When you choose Everyone, no one will be able to see you whenever you are online. But when you select Same as Last Seen, the feature will use your Last Seen settings. For those who may not know, here’s some info about this separate feature;

The Last Seen essentially shows or hides when you last opened the app, and it comes with four different settings from which you can pick. The first setting is Everyone. Just as the name suggests, it shows everyone, including anyone who may not be on your contacts list, your last online status.

The fourth setting is Nobody. As the name implies, it does not show anyone the info. To give you an idea of what this upcoming privacy-oriented feature will look like, here’s a screenshot we took from WABetaInfo. 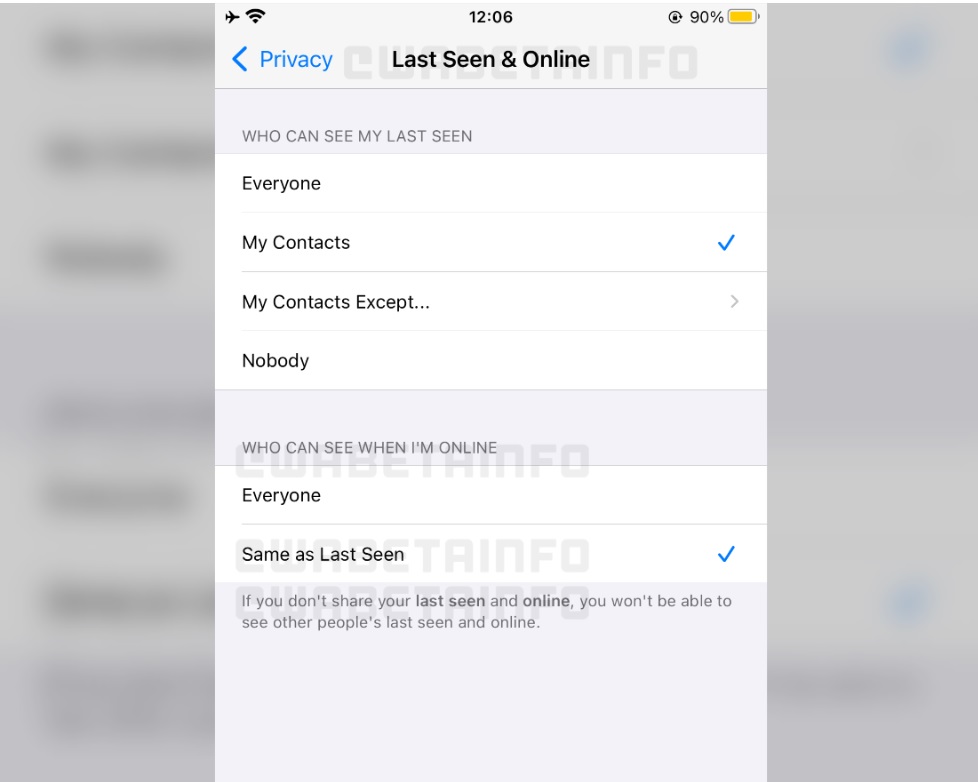 Will this privacy setting feature support my platform? In response to the question, it’s still too early to tell which platforms it will accept. But we are sure that iOS will be one of them as an android phone captured the above screenshot before being shared on Indianexpress. Something else to note here is that Whatsapp has always released its Android and iOS updates. It may not be different either.

When Exactly Is the New Whatsapp Privacy Feature Coming Out?

Unfortunately, the company hasn’t yet announced the date it will roll out this feature as it’s still in the development stage. After this stage, it will go to the beta testing stage, where beta testers will test the software for bugs and other issues and recommend a few changes or improvements if necessary. It’s only after those two stages that Whatsapp will release it. It means we could be looking at a few weeks or months before we get to enjoy it.

With the reports about the development of the “Online” indicator feature, there’s no doubt that Whatsapp continues to take user privacy seriously. In the past, we’ve seen the company introduce many other features for the same purpose. These include the Last Seen feature we’ve mentioned briefly and the End-to-End Encryption setting that ensures only you and the individual you’re communicating with can read or listen to your chats, and no one else, not even WhatsApp.

A few months ago, Whatsapp embarked on testing an update that will give group admins more moderation power…
byMike Diver