Joining Big Blue’s storage lineup are the new FlashSystem A9000 (pictured), A9000R and high-end IBM DS8888. Announced last week, the arrays feature MicroLatency modules from IBM that accelerates data transfers within the arrays in hardware rather than software. They also include multi-tenancy and built-in quality of service, capabilities intended to help cloud providers avoid possible security and noisy neighbor problems.

The FlashSystem A9000 is available in capacities of up to 105.6 terabytes (TB), or 300 TB when the array’s data reduction features are switched on. 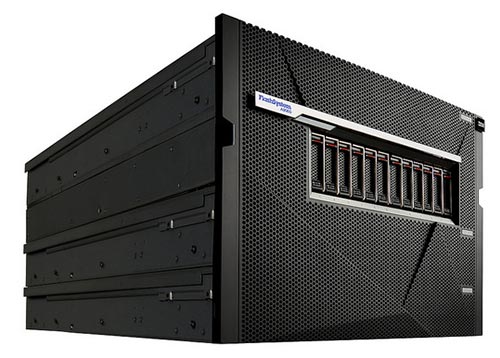 Powered by IBM’s FlashSystem storage management software, the A9000 supports thin provisioning, pattern removal and space-saving snapshots, along with inline deduplication and compression. The hardware can pump data at a rate of 500,000 input/output operations per second (IOPS) and offers bandwidth of up to 4.5 gigabytes per second (GB/s).

Available in 900 TB and 1.8 PB configurations, the FlashSystem A9000R can hit the 2 million IOPS mark and up to 18 GB/s in bandwidth. Finally, IBM also launched the DS888, the all-flash version of its IBM DS8880 family of hybrid storage arrays first introduced last year for big iron environments.

The systems are IBM’s response to a cloud computing market that is grappling with delivering applications that are growing ever more sophisticated and data-hungry, according to Greg Lotko, general manager of IBM Storage and Software Defined Infrastructure.

“The drastic increase in volume, velocity and variety of information is requiring businesses to rethink their approach to addressing storage needs, and they need a solution that is as fast as it is easy, if they want to be ready for the Cognitive Era,” said Lotko in an April 27 announcement. In recent years, IBM has been revamping its IT hardware, software and cloud portfolio, including its high-profile Watson cognitive computing system, in preparation for the impending onslaught of enterprise artificial intelligence applications.

“IBM’s flash portfolio enables businesses on their cognitive journey to derive greater value from more data in more varieties, whether on premises or in a hybrid cloud deployment,” continued Lotko.