Finalized standards for running block-level data over IP networks are due this year.

With the advent of new IP storage products and transport protocol standardsiSCSI, FCIP, and iFCP (due out in mid-2002)end users now have more choices for accessing data over IP networks. With the emergence of these products and standards, the Storage Networking Industry Association’s (SNIA) IP Storage Forum is rising to the challenge of educating end users on the differences among the three data transport protocols.

The benefits of IP storage networking have been well recognized within the network-attached storage (NAS) arena for moving files over IP-based LANs. IP storage leverages the large installed base of Ethernet-TCP/IP networks and enables storage to be accessed over LAN, MAN, or WAN environments, without needing to alter storage applications. It also lets IT managers use the existing Ethernet/IP knowledge base and management tools.

However, for block-level data that is stored as either direct-attached storage (DAS) or on a Fibre Channel storage area network (SAN), taking advantage of these benefits requires new transport protocols for moving that data over IP networks. The development of IP storage networking transport mechanisms for block-level storage enables IT managers to create and manage heterogeneous environments where DAS and Fibre Channel SANs can be integrated over a common IP network backbone. These environments will allow better utilization of storage resources and support existing storage applications such as backup and disaster recovery. New developments in IP storage networking (e.g., storage virtualization, which enables managers to create virtual storage pools among geographically dispersed DAS, NAS, and SAN data resources) have also fostered new applications to better manage these environments.

The three IP storage networking transports are significantly different, but they all provide a common function: transporting block-level storage over an IP network. All three transports enable end users to

The Internet Small Computer Systems Interface (iSCSI) protocol defines the rules and processes to transmit and receive block storage applications over TCP/IP networks by encapsulating SCSI commands into TCP and transporting them over the network via IP.

The Internet Fibre Channel Protocol (iFCP) supports Fibre Channel Layer 4 FCP over TCP/IP. It is a gateway-to-gateway protocol where TCP/IP switching and routing components complement and enhance, or replace, the Fibre Channel fabric.

Figure 1 illustrates the protocols supported at each end device and their underlying fabric services. The end device is either a host or a storage device, and the fabric services include routing, device discovery, management, authentication, and inter-switch communication.

When considering deployment of any of these IP storage networking mechanisms, you first need to consider your current storage environment and what you want to achieve. Here is a closer look at each of the three transports and how they are deployed. 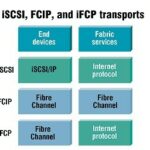 The primary market driver for the development of the iSCSI protocol is to enable broader access of the large installed base of DAS over IP network infrastructures. By allowing greater access to DAS devices over IP networks, these storage resources can be maximized by any number of users or utilized by a variety of applications such as remote backup, disaster recovery, and storage virtualization. A secondary driver of iSCSI is to allow other SAN architectures such as Fibre Channel to be accessed from a wide variety of hosts across IP networks. iSCSI enables block-level storage to be accessed from Fibre Channel SANs using IP storage routers or switches, furthering its applicability as an IP-based storage transport protocol.

Between the standards efforts coming to completion and the SNIA IP Storage Forum’s multi-vendor interoperability testing and demonstrations, iSCSI-compliant products will enable users to rapidly deploy IP SAN environments and immediately take advantage of the “plug-and-play” benefits of iSCSI. Many iSCSI products are already available, based on early versions of the specification.

How iSCSI works iSCSI defines the rules and processes to transmit and receive block storage applications over TCP/IP networks. At the physical layer, iSCSI supports a Gigabit Ethernet interface so that systems supporting iSCSI interfaces can be directly connected to standard Gigabit Ethernet switches and/or IP routers. The iSCSI protocol sits above the physical and data-link layers and interfaces to the operating system’s standard SCSI Access Method command set. iSCSI enables SCSI-3 commands to be encapsulated in TCP/IP packets and delivered reliably over IP networks.

iSCSI can be supported over any physical media that supports TCP/IP as a transport, but today’s iSCSI implementations are on Gigabit Ethernet. The iSCSI protocol runs on the host initiator and the receiving target device. iSCSI can run in software over a standard Gigabit Ethernet network interface card (NIC) or can be optimized in hardware for better performance on an iSCSI host bus adapter (HBA).

iSCSI also enables the access of block-level storage that resides on Fibre Channel SANs over an IP network via iSCSI-to-Fibre Channel gateways such as storage routers and switches.

Considerations for iSCSI deployment Initial iSCSI deployments are targeted at small to medium-sized businesses and departments or branch offices of larger enterprises that have not deployed Fibre Channel SANs. iSCSI is an affordable way to create IP SANs from a number of local or remote DAS devices. If there is Fibre Channel present, it is typically in a data center, which can be accessed by the iSCSI SANs (and vice versa) via iSCSI-to-Fibre Channel storage routers and switches. 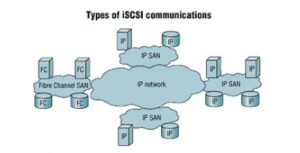 iSCSI SANs can be deployed within LAN, MAN, or WAN environments, as shown in Figure 2. The important cost saving factor to realize in any iSCSI SAN deployment is that the network infrastructure supporting iSCSI SANs is standard Gigabit Ethernet switches and/or IP routers. You can use your existing network and IT support resources with an iSCSI deployment, reducing TCO.

The emerging FCIP protocol standard takes advantage of the installed base of Fibre Channel SANs, as shown in Figure 3, and the need to interconnect these SANs to support mission-critical environments. SANs provide the high performance and reliability required to support business continuance and disaster tolerance environments, including remote backup/archiving, high availability, remote mirroring, and centralized management. 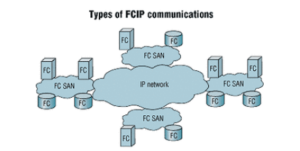 Figure 3: FCIP enables multiple local Fibre Channel SANs to be interconnected, or remote SANs to be managed, over an IP network backbone.Click here to enlarge image

For most of these applications, Fibre Channel SANs can be interconnected to meet the needs for remote storage access. However, by combining IP networking with SAN technology, you can extend the interconnectivity of SANs across much longer distances. FCIP provides the transport for traffic going between specific Fibre Channel SANs over LANs, MANs, and WANs. Like iSCSI, the FCIP protocol is also being developed within the Internet Engineering Task Force (IETF) IP Storage Working Group and is expected to be completed by mid-year.

How FCIP works FCIP solutions encapsulate Fibre Channel packets and transport them via TCP/IP, which enables applications that were developed to run over Fibre Channel SANs to be supported under FCIP. It also enables organizations to leverage their current IP infrastructure and management resources to interconnect and extend Fibre Channel SANs.

FCIP is a tunneling protocol that uses TCP/IP as the transport while keeping Fibre Channel services intact. FCIP relies on IP-based network services and on TCP/IP for congestion control and management. It also relies on both TCP/IP and Fibre Channel for data-error and data-loss recovery.

In FCIP, gateways are used to interconnect Fibre Channel SANs to the IP network and to set up connections between SANs, or between Fibre Channel devices and SANs. Like iSCSI, there are a number of “pre-standard” FCIP products on the market.

Considerations for FCIP deployment FCIP enables multiple local or remote Fibre Channel SANs to be interconnected over an IP network backbone. Since FCIP keeps Fibre Channel services intact, it enables you to maintain a high-performance SAN base, while transparently increasing the interconnectivity and data sharing between SANs on an IP network.

FCIP gateways enable you to connect to a standard Gigabit Ethernet/IP infrastructure, so you are able to cost-effectively set up and manage an IP-based SAN-to-SAN network backbone. FCIP SANs can be deployed over LANs, MANs, or WANs.

Like FCIP, the primary market drivers for iFCP are the large installed base of Fibre Channel devices, combined with the momentum toward IP storage networking. The emerging iFCP standard leverages the high performance and interoperability of the Fibre Channel protocol, while taking advantage of IP networks.

Enterprise-class solutions within a data center such as centralized backup, remote mirroring, storage management, and storage virtualization are supported within an iFCP environment due to the ability to create a scalable, peer-to-peer Fibre Channel/IP storage network.

Considerations for iFCP deployment Centralized consolidation of Fibre Channel SANs via iFCP is a consideration for those environments where there is a heavy investment in both Fibre Channel SANs and an enterprise-wide IP network backbone. The driving force behind iFCP is the expansion of IP-based network services to interconnect Fibre Channel devices and SANs. The increased port density and lower cost of Gigabit Ethernet switches vs. Fibre Channel switches enables these environments to scale and expand without increasing overall cost of ownership. Like FCIP, applications developed for Fibre Channel SAN environments are supported over iFCP. iFCP’s peer-to-peer storage networking benefits enable broad access to, and consolidation of, storage resources to be used by a number of enterprise-class applications.

Even with the differences in transport mechanisms and deployment strategies, the one common factor that makes iSCSI, FCIP, and iFCP worth considering is the ease of deployment, management, and support associated with IP networking. All three transports will continue to be put through their paces with SNIA-supported interoperability testing and demonstrations.