Storage wasn’t the brightest spot in HP’s fiscal Q2 earnings report yesterday, but it was far from the darkest spot. In fact, there weren’t any dark spots.

The only laggards were software (down 1% from last year) and services (which grew only 2% from the previous year, to $8.7 billion).

It’s difficult to put context on earnings these days because of the relative macro economic conditions today vs. a year ago, but by anyone’s estimates this was a stellar performance by HP in a still-tough climate.

In fact, it prompted The Motley Fool to pen a column comparing HP to IBM (see “HP is the New Big Blue”).

Unfortunately, HP does not get real granular in breaking down its product lines, but the Enterprise Storage and Server segment racked up $4.5 billion in total revenue, up 31% over the previous year. That segment was led by Industry Standard Server revenue, which increased 54%, while the Storage segment revenue increased a solid 16%, with the EVA product line up 3%.

HP is clearly a bellwether for the overall IT industry, although not so much for the storage sector. However, NetApp and Brocade are bellwethers for the storage industry. Brocade (NSDQ: BRCD) will report results for its fiscal second quarter after the market closes tomorrow (Thurs., May 20), and NetApp (NSDQ: NTAP) will announce results for its fiscal fourth quarter next week (Wed., May 26).

Stay tuned to see if you’re in the right business or not as the market turns.

– LSI expanded its channel presence today with the announcement of the CTS2600 family of building blocks, which…
byDave Simpson 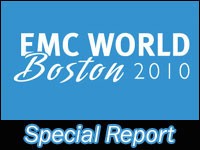 Disk Arrays: NetApp, HP Duke It Out For #3 Spot