Backup Appliance Market Grew In Q2 With EMC In The Lead

EMC, now a part of Dell Technologies, was the leading vendor in a growing backup storage systems market last quarter, according to the latest figures from research firm IDC.

A purpose-built backup appliance, according to IDC’s definition, is “a standalone disk-based solution that utilizes software, disk arrays, server engine(s), or nodes that are used for a target for backup data and specifically data coming from a backup application (e.g., NetWorker, NetBackup, TSM, and Backup Exec) or can be tightly integrated with the backup software to catalog, index, schedule, and perform data movement.” It can be deployed as a gateway or as a standalone system. 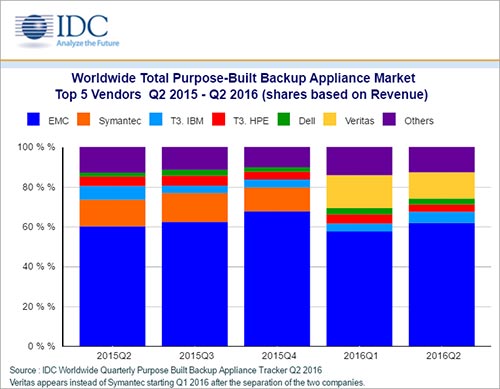 Open systems revenue climbed to $787.6 million, up 12 percent on a year-over-year basis. Even after three quarters of year-on-year declines, the mainframe backup systems segment bounced back with a 6.2 percent gain, said IDC.

Liz Conner, research manager at IDC’s Storage Systems practice, said part of the reason for the uptick is that vendors are doing a better job of delivering products that solve the backup challenges faced by enterprises.

“The [purpose-built backup appliance] market posted a strong performance in the first half of 2016. Responding to end-user pain points, vendors continue to improve their product portfolios with greater emphasis on automation, simplified management tools, improved RPO/RTOs [recovery point objectives/recovery time objectives], and the ability to tier to the cloud,” said Conner in a statement.

EMC unsurprisingly led the market with over a half-billion dollars in revenue ($538.4 million) and a 61.8-percent share of the market. During the EMC World conference in May, the company unveiled new cloud-enabled backup solutions and new VCE Data Protection Appliances that include Data Domain and EMC data protection software and slash deployment times by up to 75 percent, the company claimed.