A recent Pew survey suggests that US teens choose TikTok over Facebook as their preferred social media platform en masse.

While Instagram and Snapchat have marginally improved their ratings, the sharp fall in Facebook users, especially in the teenage demographic, has sparked new discussion on whether Facebook is still a dying company.

What Does The Pew Survey Say About Teen’s Social Media Usage? 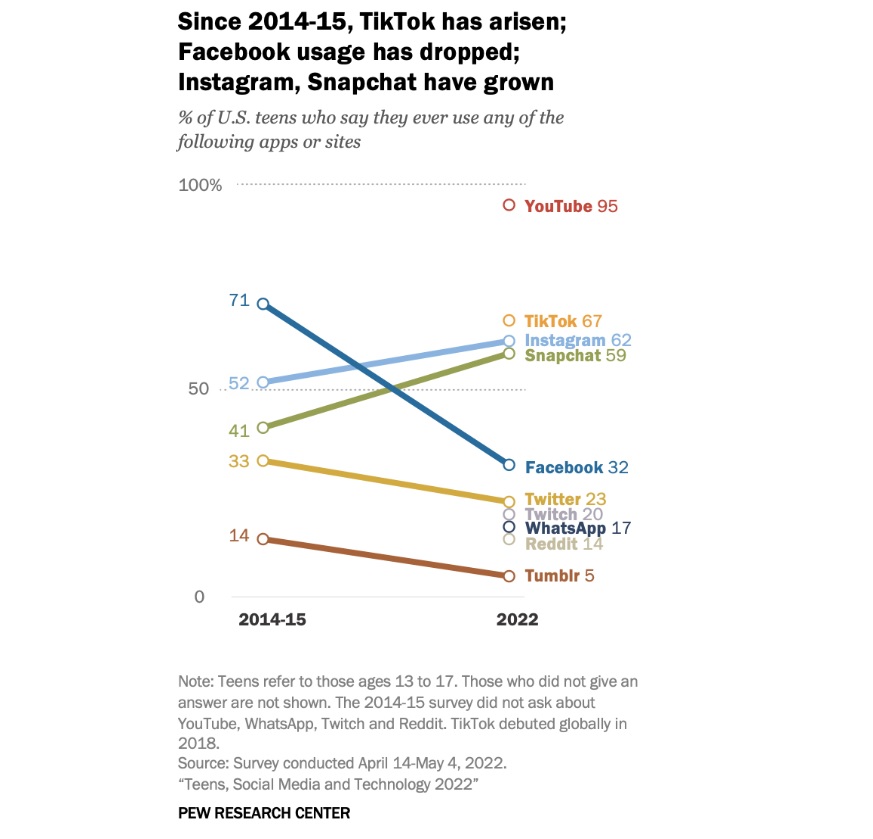 The Pew survey aims to study the US teenagers’ choice of social media platforms and their use of digital devices. The survey was conducted online with 1316 respondents in the 13-17 age group from April 14 to May 4, 2022.

However, TikTok is yet to achieve the top spot. Alphabet-owned video hosting and streaming platform Youtube has made its way to the top as 95% of teens are regularly using it.

The remaining space is occupied by other social media platforms like Twitter, Whatsapp, Twitch, and Reddit. Tumblr is well on its way to oblivion as it assumes the last spot in the ranking.

The survey has brought out some essential demographic information as well. Teen boys are more likely to use YouTube, Reddit, and Twitch. On the other hand, girls are more inclined to use TikTok, Instagram, and Snapchat.

The Rise of Video Format

Overall, the survey suggests a shift in the ongoing trend of how teens prefer social media content production and broadcasting. It’s the videos, and more specifically, short videos.

The Dominance of TikTok

The meteoric rise of TikTok with 67% user share and the top spot achieved by YouTube, which draws 95% of teen users combinedly, suggest that the new generation of internet users are more interested in video consumption and passive scrolling rather than posting and engaging.

All of this contributes to the feeling of community and charm of TikTok.

Whereas TikTok is on its steady ascent to become the most downloaded application of 2022, trouble is brewing for Meta-owned Facebook and Instagram.

Recently, it released a series of changes to upgrade the platform’s competitive edge. But it has drawn severe backlash from famous Instagrammers like Kylie Jenner and Kim Kardashian.

Despite upgrades and modifications to promote a better user experience, the prospects of Instagram do not appear to be future-proof.

However, the world of social media is ever-changing. So it is not yet over for Facebook or Instagram.