PlatinumGames has announced that the third sequel to Bayonetta will be released this autumn. Nintendo recently announced that the third title of this action-adventure video game series would be available from October 28, 2022. The maker of Nintendo Switch, one of the video game consoles that support Bayonetta, even shared a short trailer of Bayonetta 3, not to mention added an option for buyers to pre-order the game.

Here’s A Quick Summary Of Nintendo’s Bayonetta 3 Based On The Trailer: Bayonetta 3 comes with new locales, including the mountains of China and the streets of Tokyo. Sporting an evil-looking new ensemble, Bayonetta encounters witches more formidable than ever who haven’t given up on their original quest to wipe out humanity, history, and reality as we know it for good.

She fights through the streets as she heads somewhere to find a scientist named “Sigurd,” who is supposed to offer some help.

When she faces a mysterious evil, things get complicated and nasty, and she can only depend on her time-slowing ability and signature guns. This time, she overcomes the Homunculi, the invading artificial bioweapons that have been a pain in the neck in the previous titles.

It’s also worth noting that Bayonetta comes with a power known as “Demon Masquerade.” With it, she can channel the demon linked to her weapon to the mysterious creatures she has to defeat. This feature allows for some frightening yet exciting combos for the player to ensure fascinating action options.

There’s also a new playable character called “Viola,” a powerful witch armed with a deadly sword backed up by Cheshire, an unpredictable demon. You can assume her role of slashing and slaying evil creatures in hair-raising maneuvers.

What Is Special About Bayonetta 3 Release

Bayonetta 3 arrives nearly thirteen years after the initial sequel’s 2009 release. The second sequel, “Bayonetta 2,” came out in 2014, six years later. It’s been almost eight years since PlatinumGames treated its fans to a new Bayonetta sequel. We hope the company will compensate for that by offering us more adventure and exciting challenges in Bayonetta 3.

It’s a highly-anticipated sequel that many are pre-ordering hardly three weeks before its unveiling date. Nintendo UK, a fast-growing YouTube channel with about 359 subscribers, also recently shared the trailer of Bayonetta 3, which is highly promising. The response indicates that the game will be a major hit. 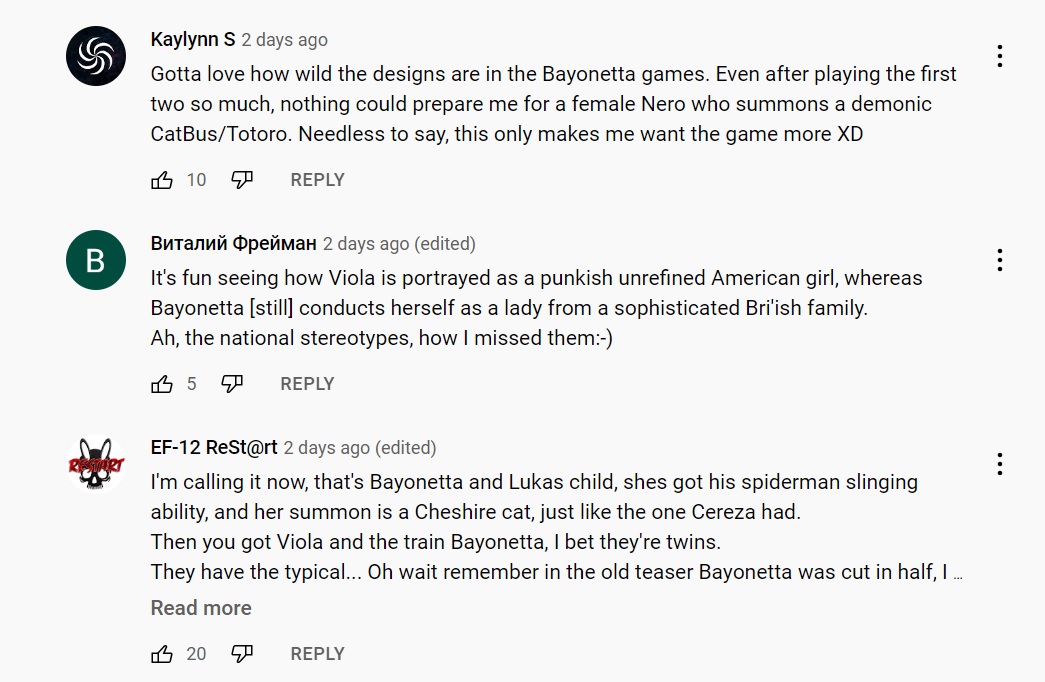 Despite being published two days ago(July 13, 2022), the trailer has already garnered 205,854 views and almost 10k likes, with many viewers commenting positively about it. Here’s a screenshot of the comments;

Many people have anxiously waited for Bayonetta 3 since Nintendo talked about it in 2017. So, when the company recently mentioned October 28, 2022, as the release date, many couldn’t hide their happiness, as you can see in their comments within the screenshot above. It’s phenomenal to see how people are already pre-ordering the game at Nintendo’s online store, among other video game stores.

Author
Kajal Shinde
Kajal is an Indian senior technology news reporter. She obtained a master's in media and journalism with a minor in creative writing from the University of St. Leo, and her writings have appeared in more than 70 news outlets. She has covered the latest tech news, decentralized finance, DAOs, and venture capital investment for startups.

Are Gaming Laptops Good For Video Editing? Know Everything

Are Gaming Laptops Good For Video Editing Tasks? Gaming laptops are often considered to be a high-end solution…
byKrishna Saraogi